You’ve most likely heard of Juneteenth, the now-federal holiday in the United States that commemorates the emancipation of enslaved African Americans each June 19.

It was on that date in 1865 when Union Gen. Gordon Grainger set up his headquarters in Galveston, Texas and famously signed an order proclaiming “All slaves are free.” President Joe Biden made Juneteenth a federal holiday in 2021.

You may not be as familiar with Emancipation Day, also known as Freedom Day, which traces its origins to Tennessee.

This August 8th marks the 159th anniversary of Emancipation Day, when Andrew Johnson freed his personal slaves at his home in the East Tennessee town of Greeneville in 1863. That was some seven months after President Abraham Lincoln’s Emancipation Proclamation — issued at the height of the Civil War — freed the slaves of the Confederate states in rebellion against the Union.

At the time, Johnson served as Tennessee’s military governor. Lincoln later chose him as his vice president, and he went on to serve as the 17th president of the United States after Lincoln’s assassination in 1865. 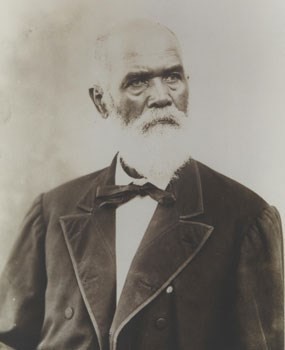 It was Sam Johnson (pictured here), a man formerly enslaved by Andrew Johnson, who was a key organizer in having the date observed with the first recorded August 8th celebration in 1871 in Greeneville.

And my, how folks celebrated.

There were brass bands, and parades featuring decorated horse-drawn carriages and floats, followed by bountiful picnics, lively fiddle-driven dancing, baseball playing and other games, and orators discussing the long, hard road from slavery to freedom.

August 8th has continued to be recognized as a holiday in the African-American community in Tennessee, surrounding states and throughout Appalachia.

For instance, one of the earliest recorded Emancipation Day celebrations in Clarksville, Tennessee, occurred in 1898, according to an article from The Tennessee Historical Society.

According to the article: “Over 1,000 residents and visitors gathered at Porter Bluff Park on August 8, 1898, to parade through the greenway. With each subsequent gathering, the Eighth of August jubilees grew. Black townspeople flooded the city’s streetcars, while several thousands of black residents from cities as far south as Nashville and as far north as Indianapolis bustled into the city by train, steamboat, buggy, horse, foot, and later by motor bus and car.

“As noon approached, a band headed a procession of decorated horse-drawn carriages and automobiles, floats, and various civic organizations through downtown. Later in the evening, the attendees picnicked and barbecued, danced to lively tunes, played baseball and other games, and listened to local orators discuss the harrowing journey from slavery to freedom.”

In recent years, the city of Russellville, Kentucky, hosts the 8th of August Emancipation Celebration Festival at Hampton Park. According to the Russellville News-Democrat and & Leader newspaper, activities at the four-day 2021 festival included a pageant, basketball tournament, football, softball, golf, a 5-kilometer run and corn hole competitions.

In Tennessee, Emancipation Day 2022 celebrations are scheduled in Knoxville.

In 2007, then-Tennessee Gov. Phil Bredesen signed legislation acknowledging August 8th as “Emancipation Day” in the state… “… to honor and recognize the celebration of the action of Andrew Johnson, seventeenth president of the United States and then military governor of Tennessee, in freeing his personal slaves on August 8, 1863, and the significance of emancipation in the history of Tennessee.”

And now, each August since 2011, we also celebrate Black Philanthropy Month, a global celebration and concerted campaign to elevate African-descent giving and funding equity.

In the spirit of giving and funding equity, it must be acknowledged from the start that the economy of the state of Tennessee — both in urban industrial cities and rural agricultural areas — wouldn’t have survived, much less thrived, in its early days without slavery.

By 1860, Tennessee’s 275,719 slaves represented just under 25 percent of the state’s total population. This was similar throughout the South.

The city of Nashville not only was the site of a slave market —located just two blocks west of what is now the Metro Courthouse — the city itself actually owned slaves.

As documented in historian Bill Carey’s 2018 book “Runaways, Coffles and Fancy Girls: A History of Slavery in Tennessee,” Nashville’s “slaves of the corporation,” as they were called, were purchased and owned by the city.

Generations enjoyed drinking water from those pipes. Maybe we all have, depending upon how long those cast-iron pipes, there but because of slavery, have lasted.

Meanwhile, the aforementioned Sam Johnson not only spearheaded the first Emancipation Day celebration, a few years earlier he made his debut as one of Tennessee’s first Black fundraisers, with his former slave owner, Andrew Johnson, as his the benefactor.

As the National Park Service documents in the article “Slaves of Andrew Johnson,”

“When Andrew Johnson became president in 1865, journalists became interested in his history and hometown. A reporter from Frank Leslie’s Illustrated Newspaper visited Greeneville and wrote that Sam was living in Johnson’s old Tailor Shop.

“In March, 1867, Sam sent a letter to President Andrew Johnson. It read:

‘I have been appointed one of the Commissioner of the Freedmens Bureau, to raise money with which to purchase a suitable Lot on which to build a School House for the education of the Coloured children of Greeneville – and my object in troubling you upon, the subject is to ascertain if there would be any chance for me to purchase an acre Lot off of one of your Tracts that lies out West of Town close to the Reble Graveyard. If you will let us have the Lot and will send me word as to the price of it I will send you the money, and would like for you to send me a deed to it. I am getting along as well as usual and have not changed any in Politics still being for you as much as ever. I would like to see you all very much.’

The article continues, “Johnson’s response to Sam’s request was to have a representative ‘select the lot wanted have it surveyed, plat made, and a deed drawn up…and send the instrument to me. I will convey the land to them without charge…’”

More than a century and a half later, while Black philanthropy thrives, funding equity remains elusive.

Andrew Johnson’s slaves, after all, never left him after being emancipation on that 8th day of August in 1863.

They chose to remain with and his wife, Eliza, as paid servants.

As for Andrew Johnson, he remained until his death in 1875 at age 66 a man of contradictions, a Southerner but Union man, freer of slaves but a slave holder, and ultimately a failed president whose reconstruction efforts helped restore the racist plantation economy in the South.

As president, remembered by historians as one of the worst in history, he avoided impeachment by a single vote.

How times change. And how they remain so eerily similar.

“We still, today, have a long way to go,” Civil Rights icon Rosa Parks once said, “and we have to continue our work.”

Join Give Black, Give Back in Celebrating Black Philanthropy Month: Fierce Urgency of Now! 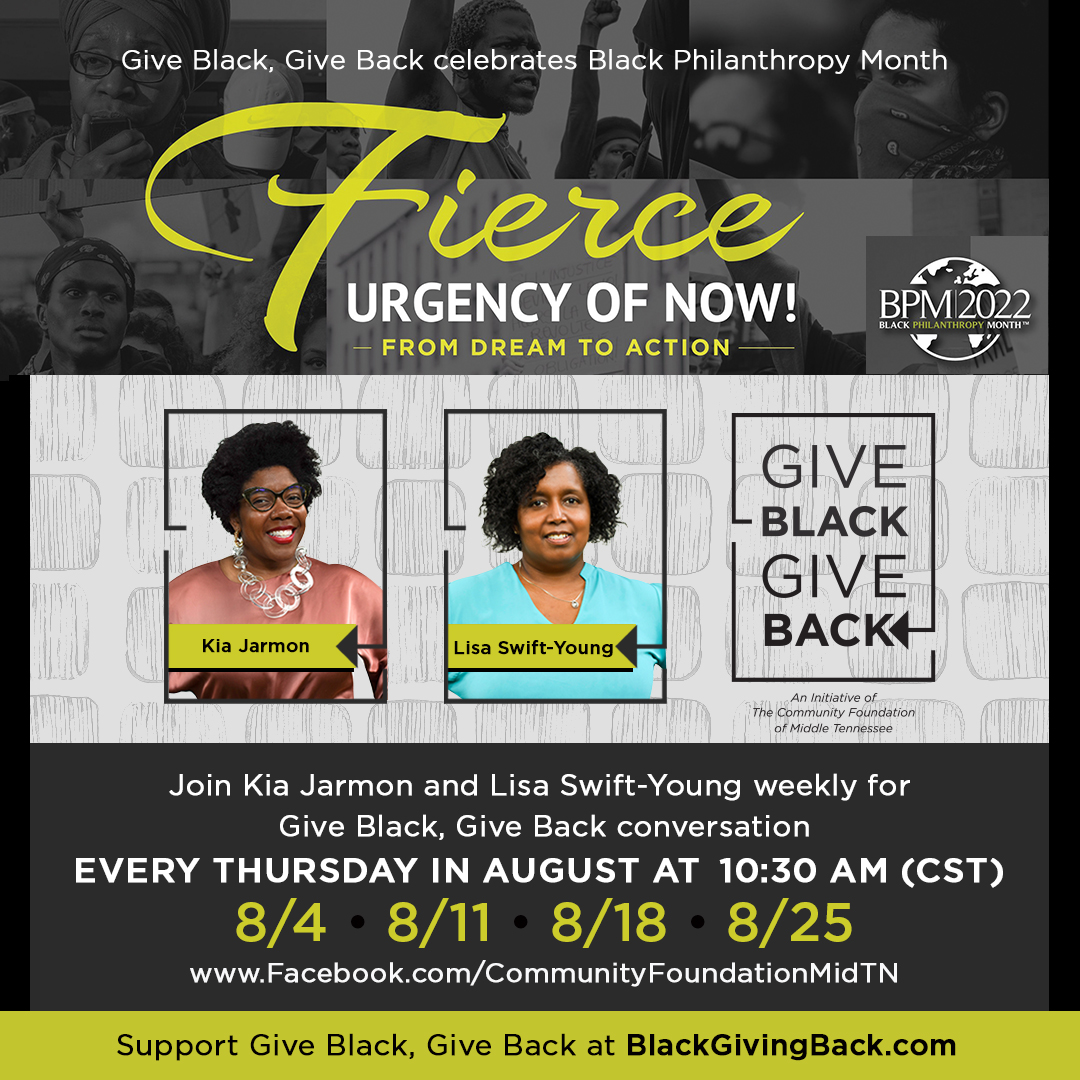 “We are now faced with the fact that tomorrow is today. We are confronted with the fierce urgency of now. In this unfolding conundrum of life and history, there ‘is’ such a thing as being too late. This is no time for apathy or complacency. This is a time for vigorous and positive action.” – Dr. Martin Luther King Jr.