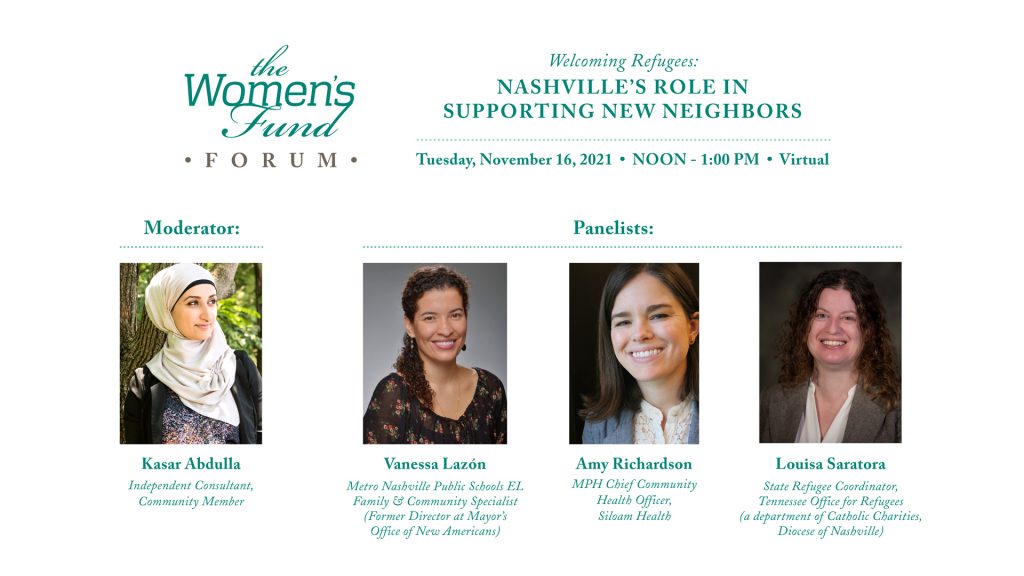 Amy Richardson, MPH, is an advocate for vulnerable populations and their well-being locally and globally. Though a proud Nashville native, Amy’s work and travel abroad led her to recognize the interconnectivity of the world. She entered the sphere of health care through a side door, becoming a public health advocate while simultaneously developing a passion for refugees and immigrants. She has served in numerous leadership roles with refugee and immigrant agencies in Nashville, and she currently works as Chief Community Health Officer at Siloam Health.

Vanessa Lazón, a native of Lima, Perú, moved to Nashville in the late nineties to finish high school.   Her immigration experience, along with her experiences in college and career in nonprofit work, helped her understand the value of appropriate resources and supports for New Americans/English Learners to successfully begin their journey towards a thriving and engaging life in a new country. Lazón works for the Office of English Learners (EL) at Metro Nashville Public Schools (MNPS) as the EL Family & Community Specialist. In this role, she works directly with EL families and schools to solidify the pivotal partnership needed for students to be successful. Vanessa spent a big part of her first year with MNPS helping families overcome the challenges that come with virtual learning due to the pandemic but has since been working to plan and implement initiatives and community partnerships to support EL students and their families.

Louisa Saratora serves as the State Refugee Coordinator and has worked with refugees in Tennessee, for 25 years. She joined Catholic Charities as a caseworker through the Jesuit Volunteer Program in 1996 and since that time, has welcomed and supported refugees in direct service, program development and coordination, and grant management and oversight. Louisa holds a Master of Arts degree in Intercultural Studies from Union University in Jackson, Tennessee and a Bachelor of Arts degree in English and Spanish from Fordham University in New York, as well as certification in Teaching English as a Foreign Language.

Kasar Abdulla, a native of Kurdistan of Iraq, was forced to become a refugee in 1988 when Saddam Hussein waged war on her region.  At the age of 6, Abdulla and her family were forced to relocate to a Refugee Camp in Meriden, Turkey, until 1992 when they settled in Fargo, North Dakota.  She is a graduate of Tennessee State University and earned a Master of Arts in Conflict Management from Lipscomb University in 2016.  Her work has been dedicated to creating spaces that are inclusive, systems that are equitable and strengthening relationships that value diversity.  Abdulla was named a “Champion of Change” in 2013 by President Obama for her work on immigrant integration in Tennessee.